Proud to Announce our Newest Partnership with Snowflake!

Here’s the problem: we are always under pressure to reduce the time it takes to develop a new model, while datasets only grow in size. Running a training job on a single node is pretty easy, but nobody wants to wait hours and then run it again, only to realize that it wasn’t right to begin with.

The solution is where Horovod comes in - an open source distributed training framework which supports TensorFlow, Keras, PyTorch and MXNet. Horovod makes distributed deep learning fast and easy to use via ring-allreduce and requires only a few lines of modification to user code. It's an easy way to run training jobs on a distributed cluster with minimal code changes, as fast as possible.

The main benefits in Horovod are (a) the minimal modification required to run code; and (b) the speed in which it enables jobs to run. Horovod is installed using pip and it requires the prior installation of Open MPI and NVIDIA’s NCCL - two libraries which support inter-GPU communication. A Data Science Platform such as Iguazio offers them already deployed.

Here's an example that demonstrates how to use Horovod to take an existing training job and run it as a distributed job over several GPUs. We used an existing image classification demo for image recognition. The demo application builds and trains an ML model that identifies (recognizes) and classifies images:

Before running the job, the first phase is to bring data in and prepare it for training. We don't cover this prep work here, but more info about it is available in Iguazio’s V3iO Github repository.

We change the training code itself to use Horovod once the data is prepared. The code below includes references to the section we had to adjust in order to run it with Horovod. 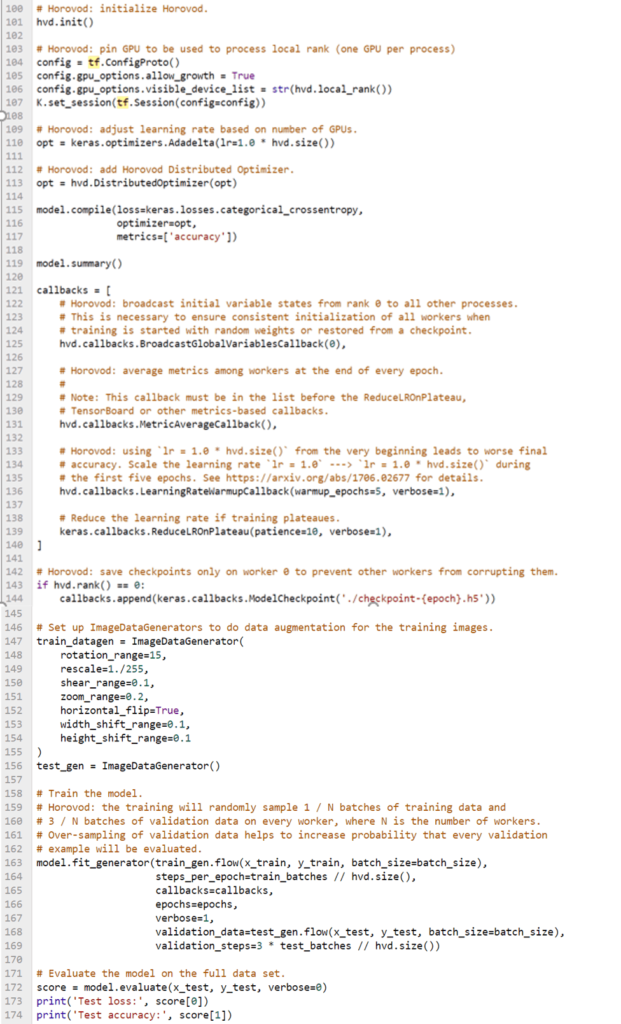 Now, let’s run it from Jupyter. Note that users can control the number of GPUs and workers for the job. In this case we’ll run it on a DGX machine with 8 GPUs. Each replica uses one GPU. In order to run the job, the user needs to specify the image location and the actual Python code (as seen above).

Once the job is running we should be able to see number of pods as the number of workers and track their status. Note that when the job is launched, Horovod opens up a launcher job as well. Logs are accessed through the launcher pod.

In addition we can leverage NVIDIA library (nvidia-smi) to get real-time GPU stats:

Note that Horovod immediately frees the GPU resources when the job is done.

Conclusion
We’ve demonstrated how to convert an existing deep learning training job into a distributed job using Horovod with minimal code changes, and then monitor it while it’s running. We also covered devops as Horovod requires library deployment in order to make it ready for a data scientist to easily consume. Data Science Platforms such as Iguazio already have those libraries ready and therefore do not require additional devops - so that data scientists can focus on converting their code.

This post was written with contribution from Iguazio Big Data Team Leader, Golan Shatz and Iguazio Data Scientist, Or Zilberman.

Best Practices for Succeeding with MLOps